Particularly vulnerable Tribal Groups (PTGs) who have been identified in the Andaman & Nicobar Islands. They are:-

They were once the largest in population amongst the various tribes inhabiting the Andaman Islands. Their estimated population in 1789 was 10,000. By 1901, their number had decreased to 625 and by 1969 their number had reduced to 19 only. According to the Census of 1971, only 24 of them were around, but by 1999, their number had increased to 41. The Administration is doing its best to protect and preserve this tribe. These tribals have been rehabilitated in a small island named Strait Island. The Great Andamanese were foragers. Today, they eat rice, dal, chapati and other modern food items. They can cook food using spices. At times they still go hunting and gathering. Their traditional diet consists of fish, dugong, turtle, turtle eggs, crabs, roots and tubers. They also eat pork, Andaman water monitor lizard etc. As coastal people, they relish octopus, molluses taken out from shell of marine animals like turban shell, scorpion shell, sundial, helmet, trochus and screw shell besides various types of crabs and fish. Lately some of them have taken to cultivating vegetables and have also established poultry farms. They are vulnerable to communicable diseases besides unhealthy drinking habits, acquired after contact with the non-tribal, urban, dominant and advanced communities. 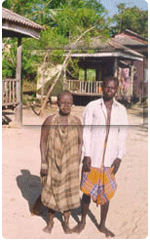 Onges are one of the most primitive tribes in India. They belong to the Negrito racial stock and they have been relegated to the reservation at Dugong Creek in Little Andaman Island. They are a semi-nomadic tribe and fully dependent on the food pro vided by nature. They have now experienced the impact of outsiders, as efforts at befriending them have proved successful. They have been provided with pucca houses, food, clothes, medicine etc. by the Administration. They eat turtle, fish, roots and jack fruits etc. They have developed artistry and crafts. The Onges can make canoes. A primary school has also been functioning at the Dugong Creek settlement of Onges. The population of this tribe is stable and is at present 110.

The Jarawa tribes with an estimated population of 341 inhabit the Western coasts of South & Middle Andaman islands. They are leading their normal life of hunting and gathering. The Ministry of Home Affairs, Govt. of India, in consultation with the Ministry of Tribal Affairs and A & N Administration had finalized a policy on the Jarawa Tribe of Andaman Island, on the basis of the recommendations of the experts in various fields. The policy was notified in December, 2004 and is being implemented strictly to ensure protection and welfare of Jarawas. In order to ensure a rich resource of forest based traditional food like wild pig, turtle, honey and fish etc, the Jarawa reserve area has been increased from 847 to 1028 Sq. kms. Exclusive marine resource base has also been increased by declaring coastal water upto 5 km from High Tide Line as tribal reserve. Exclusive Wards at Primary Health Centre, Tushnabad, Kadamtala and G.B. Pant Hospital, Port Blair for Jarawas have been provided and such Wards are declared as tribal reserves to prevent curious non-tribals from interacting with them. The Jarawa patients are being treated at these Centres. A buffer zone of 5 km radius has been notified around the Jarawa reserve, to ensure that they do not become unwitting targets of large scale tourism or commercial activities.

The Sentinelese are the inhabitants of North Sentinel Island. The area is about 60 Sq. Kilometers. They are probably the world’s only Paleolithic people surviving today without contact with any other group or community. They are considered as an off-shoot to the Onge Jarawa tribes which have acquired a different identity due to their habitation in an isolated and have lost contact with the main tribes. The Sentinelese are very hostile and never leave their Island. Very little is known about these hostile tribes. 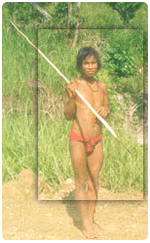 The habitation of Shompens is the Great Nicobar which is the largest among the Nicobar Group of Islands. Like the Nicobarese, they belong to the Mongoloid race. The Shompens have two divisions, the smaller division being known as Mawa Shompens. They inhabit areas very close to the coastal region along the river valleys. They are very shy. They are quite intimate with the Nicobarese. The major group of shompens are the hostile Shompens living in Alexendra and Galathia river areas and also on the east coast of the area in the interior of the island. In the past, frequent attacks are believed to have been made on the Mawa Shompens by the hostile Shompens. But now such hostility has stopped. It is probably because they have been largely reduced in number due to various diseases. The Shompens are the victims of disease, and physically very weak. With the establishment of the settlement at Campbell Bay in Great Nicobar, Shompens have been visiting the settlers and they are gradually shaking off their shyness and indifferent attitude towards the civilized people.